In This Week’s Episode:

Arica Adams, better known as “Hazel-E,” is a reality television star formerly featured on “Love & Hip Hop: Hollywood.” As her fame began to rise with the show’s ratings, her haters grew louder, putting her insecurities to the test. Eventually, Hazel-E publicly imploded on social media with a series of unhinged, racist rants that led to her dismissal from the series. Following her departure, Hazel-E pursued a music career that featured provocative lyrics and music videos — once again attracting fame for all the wrong reasons. Today, Arica is hoping to unmask her own vicious cycle of negative behavior and find better ways to express herself in an effort to grow up the dysfunctional little girl that still lives within her. Special guests include singer-songwriter Estelle, actress Chrystale Wilson (“The Player’s Club”), actress Raven Goodwin (“Being Mary Jane”) and media personality Rashan Ali. 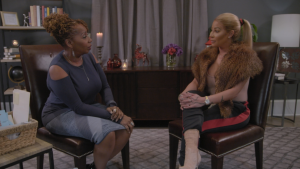 *Please be advised, graphic language in the episode.

OWN To Premiere Easter Gospel...

The Book of John Gray Returns...